It was a simple ‘mis-blunder-standing’

I was recently out of the office for a couple of days, and when checking to see what I had missed over the weekend, I found my email inbox filled with more than 1,500 emails … from just two days! Now, granted, most of these emails were “out of office” replies, but still, the sheer number alone helps to prove the point I’m trying to make – which is this: These days, email is an integral cog in the corporate machine. In fact, some people use email almost exclusively, rarely picking up the telephone (what’s this contraption on my desk making noises and flashing red?)

And with email playing such an important role in everyday work life, there are inevitable blunders that can be made. Here are a few I’ve stumbled on, in my experience, that have helped make me a little more conscientious of my email presence.

What’s in a name? – These days, many companies provide your email address for you upon orientation. Totally understandable. And the standard in most industries is to use the first letter of the first name, coupled with the employee’s last name in front of the domain. (Shout out to my friends on seven who call me “Bragland” because of this practice!) While this makes sense in most cases, there are, of course, a few exceptions to be considered.

For example: In a previous job of mine, we incorporated the industry standard as stated above. Interestingly enough, I had a friend named Stacie Lutz. (I’ll give you a second to put that together, and then a few more seconds to giggle.) As you can imagine, due to the unfortunate pairing of her first initial and last name, she received a sizable amount of “unsolicited” emails and was often flagged as a sender of spam.

Moral of the story? If you know you have names or initials that may inadvertently place your address on the spammer list, maybe have a back-up address in mind and incorporate it to save your company from wasting time trying to get you back on the safe sender list.

No one pays attention to email signatures, right? – Wrong. Sadly, this story is one I’m not particularly proud of, but if it saves one other person the embarrassment I felt, then it’s worth it.

So, a normal signature includes the basics, right? Name, title, company, phone number, email address, physical address, etc. Simple enough. In my case, I like to include links to the MultiBriefs Facebook and Twitter pages as well. Here’s where it got a bit tricky though.

When I last updated my signature, I added the new links, along with the MultiBriefs logo that linked back to the homepage … or so I thought. Turns out,  I had somehow accidentally pasted the latest Tumblr image I had used in a conversation with a coworker where the MultiBriefs link should have been. Yeah. All of this unbeknownst to me. That is, until not one, but FOUR association contacts emailed me to let me know that my links weren’t working “correctly.” (Two of them did say they enjoyed the reference to a favorite Friends episode. That’s not the point, I know, but still…) 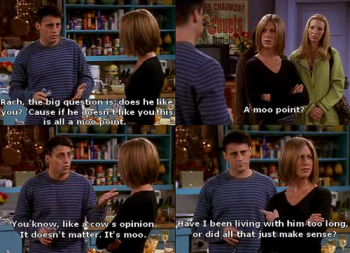 What is the point, you ask? Well, it could have been MUCH worse. Thankfully, the image wasn’t completely inappropriate or blasphemous or containing foul language (not that I would ever pass along images like that).  So, do yourself and your company a favor, and double-check your links (and phone numbers…yikes) in your signature. A few extra clicks could save you a lot of embarrassment.

Who reads my auto-response message? – Kind of surprisingly – a lot of people.
Everyone has to be out of the office at some point, whether it’s due to sick days, vacation time or a holiday. It’s always best to set an auto-response message so anyone who sends you an email knows you’re not just ignoring them for no good reason.

Know what else is always best? Making sure your auto-response message is updated and set to go to the right audience.

After returning from the New Year holiday, I sent a routine email to one of my contacts and her automatic response told me that she was sorry she missed me, but that I was not to worry because she would be back in the office July 24. “Wow!” I thought, “Talk about a nice vacation package.”

While that example isn’t quite as entertaining or embarrassing as the others, it does help show the importance of proofreading and updating your autoresponders each time you’re out of the office.

Yes, these blunders are what most would consider “mild offenses,”  but they each show the potential that lurks for really damaging mistakes to be made. So, even though emailing seems routine or second nature, make sure you do you all you can to avoid these and other “mis-blunder-standings.”